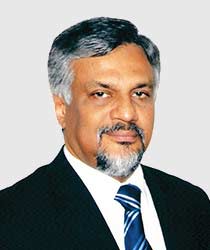 A Master Mariner, Capt. Peiris began his career on an Indian State training ship Rajendra from 1974 to 1976 on a scholarship received from Ceylon Shipping Corporation. Then he joined the Ceylon Shipping Corporation fleet and sailed in all ranks from Cadet to Ship Captain before joining a German Shipping Company for a short period. He became a Ship Captain and got the command of a foreign going (Class I) ship at the age of 28 years.

After the departure of his sailing career in 1988, he joined Ceyline Shipping Limited -a Ships Crew Management company, and was appointed the Group Managing Director of Ceyline Group. He lead the Ceyline Group to be the most diversified Shipping Group in Sri Lanka covering a spectrum of businesses within and out of the Marine Industry. CINEC Maritime Campus is a product with his initiative and one of the most successful private higher educational institutes in the region today.

In recognition of his professional contribution to the Industry he was appointed the President of Company of Master Mariners in 2005 and the Chairman of Ceylon Association of Ships’ Agents in 2006, 2007, 2008 and at present serves as the Chairman too. He also served as a member in the Committee on Maritime Affairs appointed by His Excellency the President (under the Chairmanship of Hon. Justice P. A. Rathnayake, Judge of the Supreme Court in 2009/2010.

Member : Advisory Board appointed by the Minister of Ports & Shipping.

Proshanto K Mukherjee is the former Vice Present Research director of Doctoral Programs and ITF Professor of Maritime Safety Environmental Protection at WMU. He served as Co-Director of the WMU/Lund University Joint LLM Program. He is an Honorary Research Fellow of Swansea University SU. Professor of Law at Dalian Maritime University China, Visiting Professor at the Graduate School of Human Resource Development of Chun Ang University South Korea, Visiting Professor of National University of Juridical Sciences, Kolkata, India and the Chancellor of CINEC Campus Colombo, Sri Lanka. He has been doctoral supervisor and examiner for several PH. D candidates around the world.

Professor Mukherjee spent 16 years in a seafaring career which culminated the rank of Master before he entered the legal studies and legal profession. He has served as Senior Advisor, Maritime Policy and International Affairs in the Department of Fisheries and Ocean Canada and later as Senior Deputy Director and Professor of Maritime Law at the International Maritime Law institute in Malta. He was formerly IMO Legal Adviser for the Caribbean Region. He has drafted shipping and marine environmental legislation for over twenty-eight jurisdictions around the world. He is a member of the Canadian Maritime Law Association and of the CMI Working group in Fair Treatment Seafarers.